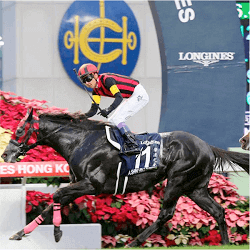 The Hong Kong Cup A

The Hong King Cup is run each year at Sha Tin racecourse in Hong Kong and it attracts top racehorses from across the globe. The Cup forms a part of the Hong Kong International Race day that involves a number of races run over different distances. The Cup was initially called the Hong Kong Invitational and was run over 1800 meters, but was changed to the Hong Kong Cup and extended to 2000 meters in 1999. This year, the race was won by Hong Kong trained Maurice, who took his record to 4 from 4, with a magnificent 3 length success.

Many horses have tried their luck at the Cup, including a number of horses from New Zealand. New Zealand horses had better results in the early days of the Cup when it had just opened to international horses. This could be due to the fact that that it is now the richest flat race in the world, attracting the best of the best from around the World.

There have been three New Zealand horses to win the cup so far. International horses were only permitted to enter the race in 1989, and then only from Australia and New Zealand. Horses were entered by invitation only, and had to have proven themselves both by placing’s as well as earnings.

Flying Dancer was a New Zealand bred horse who won the inaugural race in 1884. Although he was bred in New Zealand, he classed as a Hong Kong horse as Hong Kong businessman Lim Por-yen owned him.

Successive New Zealand bred horses included Kessem in 1990 and Romanee Conti in 1993. Criterion is another New Zealand bred horse that has entered the Hong Kong Cup three times, although has never won it. His first two tries saw him coming in third, while is third try has yet to be established. The six-year-old chestnut gelding is a superb competitor, and has been nominated as one of Australia’s stayers of the year 2016 along with the likes of Gallante and Mongolian Khan.

Lucia Ventina is a 2011 mare that was bred and ran in New Zealand since 2011. She is currently five years old in 2016, and has had a number of successes on New Zealand and Australian turf. She won a group three race on only her third start before being transferred to Kris Lee, and Australian trainer. Under Kris she has shown much potential, winning the lead up to Australian Oaks.

California Memory is a grey horse that has the honour of being the only horse to win the Hong Kong Cup twice. He won successive years in 2011 and 2012, ridden both times by jockey Matthew Chadwick. He is one of the few American horses to enter and win the cup since 1999, due to new and very strict drugging laws. He has been entered as one of the Living Legends, and has since been retired, running his last race at Sha Tin under Matthew Chadwick in which he came first.

With home-trained Maurice taking the 2016 title, it will be interesting to see whether any internationally trained horses can claim the title in 2017.