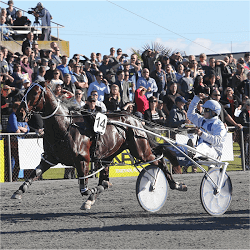 The Jewels Day race is a popular harness race that takes place in New Zealand, in Cambridge each year.  Otherwise known as the Harness Jewels, it is one of the biggest single day race meetings in New Zealand’s history. It is also world renowned, with spectators from all over the world watching via television. The Jewels is one of the biggest race meetings in New Zealand Harness Racing, only behind Cup Week in Christchurch due to its turnover, prize money and attendance

The biggest surprise of the 2016 Harness Jewels came when a rather unknown three year old filly from Kaikoura took the main race ahead of much more favourable competition. The race is open to horses from New Zealand, and more recently horses from Australia as well. All horses attend via invite only, making it a race, which includes only the best of the best.

The filly, which was bred by Kaikoura local Murray Boyd, raced against the best 3-year-old trotter in the country, including Ken and Clinton Ford’s Marcoola. Many Kaikoura locals turned up to watch their filly race and were ecstatic with her results. The race favourite, Marcoola, unfortunately galloped on the last straight, giving the win to the relatively unknown filly.

At first pacing did not come easily to Donegal Bettorgretch, although she was bred for it. Her trainer tried to break her in with hopples but that proved to be unsuccessful. Eventually, Hoppy Rundle, who has years of experience with pacers, suggested that they take the hopples off and let her flow naturally. From there Donegal Bettorgretch has not looked back, and looks to be a serious contender in the harness world.

Initially, she won two races at Addington Raceway. After that she travelled to Auckland where she won the Majestic Horse Floats mobile race of 2200m in 2 minutes 47.7 seconds. This was a national record for 3-year-old fillies at the time.

The win at the Harness Jewels in June 2016 just proved the potential of the young filly, with her trainers and owners expecting great things from her here on. She did not do exceptionally well at Canterbury in Dec 2016 however, conceding the race to the three year old gelding Enghien. Her trainer says that she follows well during the body of the race, but if she gets clear air in front of her she tends to want to run, breaking into a gallop, which results in a disqualification if not corrected.