A Look Back at the 2016 Wellington Day Cup 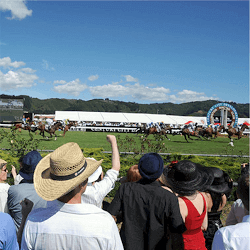 Taking a Look Back at the 2016 Wellington Day Cup Race

In New Zealand, one of the highlights of the racing calendar is the Wellington Cup Carnival. The three-day racing event spans over three weekends and provides punters and race fans with ample betting opportunities.

Of the three race days, the Wallaceville Estate Wellington Day Cup race is certainly the highlight of the festival. This group 2 race attracts a quality field from all over the country. In 2017 the Wellington Day Cup race will take place on the Saturday the 21st of January at Trentham Racecourse. With the carnival kicking off in just a few weeks, we take a look back at happened in 2016.

The 2016 Wallaceville Estate Wellington Day Cup race made its return to a distance of 3200 meters after many years as a 2400-meter race. Many race fans and bookmakers believed the depth of field for the longer distance was not a good as former races. This was plainly evident by the fact that four of the first five horses to place were paid out between $18 and $50. On the day it was Mister Impatience sitting at $28 who upset the field to cross the finish line first. Since moving to New Zealand, the horse had run a total of four races placing three fifths and one twelfth.

The Upset at Trentham

In Australia, Mister Impatience racked up two wins from 32 starts taking first at the Ballarat over a distance of 3000 meters and again the Queensland Cup over 3200 meters. Back in New Zealand, the stayer needed every bit of the two miles to create the upset and win the group 2 Wellington Cup. The long distance runner was kept on the rails by favourite Pentathlon who led most of the way down the Trentham Straight. After a brief challenge early in the straight, Pentathlon surged ahead looking for the clear win. Mister Impatience rallied again in the last 100 meters, crossing the line in a photo finish.

A first, no one knew who had won until the final decision was made upstairs. In the end Mister Impatience has nosed ahead to cause on of the biggest upsets at Trentham. Sitting at odds of $28, punters who backed the horse made off with small fortune while the majority of the crowd who backed Pentathlon looked on in disbelief.