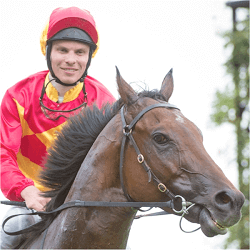 Malaguerra was born in 2011, and from the beginning, he promised to be superstar in the making. His ultra successful sire line includes Danehill, who has produced Australian winners again and again.

Malaguerra ran in the 2016 Winterbottom Stakes, where he was the second favourite to win. He came in fifth however, behind Takedown and Sheidel. This years Winterbottom Stakes proved to be a trying time for many of the favourites and Malaguerra fared better than others, but still didn’t manage to make it to the front of the pack.

Malaguerra has already run five seasons, and is not nominated for any more races as yet.

Malaguerra began his career with a first against a field of six over 1000m at Cranborne. He ran four subsequent races with disappointing results, being 9th, 10th and 8th. His trainers, Lee and Anthony Freedman then rested the three year old for almost a year as he clearly had not come into himself yet.

His second season began a year later in February 2015 with an 1100m race at Ballarat, which he romped home to win. Four races after that saw another first, a second, a fourth and a sixth. He then rested again for 127 days to regain strength and build muscle.

Malaguerra has proven be a horse that took a while to develop, but when he did there was no stopping him. His third season saw him taking no hostages with a first in his first race at Bendigo. After Bendigo he freshened for three months before happily taking home no less than three more firsts out of four.

A third spelling period allowed the gelding to mature even further, resulting in another four firsts out of six starts. His final spelling of 119 days preceded his return for three more starts, one of which was at the Darley Classic in November 2016, which he won. With that win in the bag he looked set to be a huge contender for the Winterbottom Stakes, but sadly finished a slightly disappointing fifth out of twelve.

All in all Malaguerra has what it takes to be a superstar, grade one horse, but as yet has not quite shown it. He has an explosive turn of foot, the pedigree and the race experience but his age is now against him, as youngsters like Special Reflection flash past the winning post with seemingly no effort.

Malaguerra’s sire, Magnus, is a part of the famous Danehill Danzig sire line. This line has proven again and again to produce top class winners who literally run away from their competition. Magnus himself had four wins and stands only 15.3 hands high. The diminutive stallion had four wins of his own out of 24 starts, winning over one million Australian dollars in prize money. His progeny have gone on to prove themselves over time with both older horses such as Malaguerra and youngsters such as Magnus Reign.

On the other side Maglaguerra’s dam line is just as chock full of speed as his sire line. His dam, who is by Bletchingly, has some interesting names such as Vain and Nijinsky popping up in her pedigree. She was born in 1991, and was a sprinter in her own right with three wins over 900m and 1000m.