Masar Set To Be Absent From Irish Derby 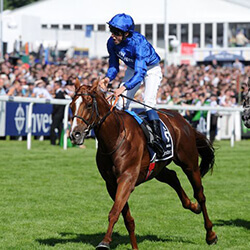 Masar, the winner of Epsom and the very first horse to earn the Godolphin’s royal blue colours is set to miss the Irish Derby that will be taking place toward the end of June.

The horse is set to drop back to 10 furlongs, and will be competing instead against older horses for the first time in the horse’s career. He will be seeing time at the Coral Eclipse Stakes that will be taking place at Sandown Park.

Charlie Appleby, trainer of Masar, has told reporters that him and Masar’s owner, Sheikh Mohammed have decided that the horse will be best suited for the Eclipse.

He went on to add that their intention is to leave him in the Irish Derby for the time being simply to keep all options open and available, but that their ultimate goal is for the horse to take part in the Eclipse.

Traditionally, Derby winners have been a mixed bag of winners and losers in the Eclipse over the past 25 years. Racers such as Benny The Dip, Motivator, Erhaab, and Authorized all having lost at the Derby after doing well at Epsom.

On the other side of the spectrum, such horses as Sea The Stars and Golden Horn have done extremely well, completing the Derby-Eclipse double in both 2015 and 2009. The news that Masar will be hearing to Sundown Park has meant that his betting odds have changed, with current odds of 2-1.