Mongolian Khan for Stayer of the Year 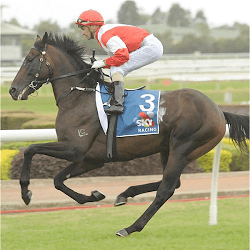 Mongolian Khan in Running for Stayer of the Year 2016

Mongolian Khan is a 2011 Australian colt best known for his blistering career over a number of Australian and New Zealand race tracks. He has won a huge amount of races, including the ATC Derby, New Zealand Derby, and Caulfield Cup.

He was New Zealand’s Horse Of The Year and Champion three year old in 2014. He is a multiple Group One winner, winning eight races from 1400m to 2400m and over $4 million in prize money over his career. Mongolian Khan is the first horse since Bonecrusher to win both the ATC Australian Derby and New Zealand Derby. Its yet to see whether he will win another title, but he is in the running for the 2016 Stayer of the Year, even after being put to sire.

Mongolian Khan was sold at the Karaka yearling sales for $140 000 after being brought to New Zealand from Australia. He began his career at two, but was raced over shorter distances, which did nothing for him. It was only when he was put over a mile that he began to literally run away with the competition.

In his three year old season Mongolain Khan won on debut at Rapa at odds greater than 40 to one. His second race was disappointing, with him coming in eleventh out of fourteen. From there however there was no stopping him. The rest of his season had seven starts for six wins. One fifth place was conceded to Volkstok’n’barrell whom he soundly beat in the next race. Mongolian Khan and Volkstok’n’barrell were to become well known rivals over the rest of his career.

Mongolian Khan only raced one more season. His four year old season was plagued with illness from which he never really recovered. He began strong with a fourth at the Highland Colours Underwood Stakes, but began to trail off after that. The highlight of the entire season was a win at the Caulfield Stakes over Trip to Paris. The colt suffered from a bought of colic at the end of 2015, just after the Caulfield Cup which prevented him from racing for a couple of months. When he did come back on the scene his performance was decidedly lacklustre, running no better than fifth in four more starts. It was decided to put the colt to stud.

Mongolian Khan has yet to prove himself as a sire, as his stud career only began at the beginning of 1026. He stands at Windsor Park Stud and follows champions such as Star Way, Kaapstad, Volksraad, Montjeu, Thorn Park and High Chaparral to have been selected.

Mongolian Khan’s sire, Holy Roman Emperor is the highest rated son of Danehill, also being highest ever-rated two-year-old Champion himself and internationally successful Group One producing sire. His sire, Danehill has produced winner after winner among thoroughbreds with a bloodline that is internationally recognised.  Other famous racehorses to carry the bloodline include Takedown, who won the 2016 Winterbottom Stakes, Holler, Black Heart Bart and Press Statement.