A New Contender For The Qipco 2000 Guineas 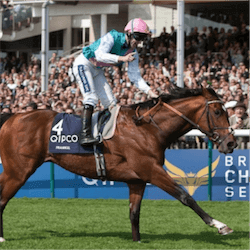 After making a surprising reappearance at the Prix Djebel, Al Wukair has emerged as a major contender for the 2017 Qipco 2000 Guineas race at Newmarket. The young colt showed some impressive potential in his two starts as a juvenile. When he returned to action, he was immediately put in as the odds-on favourite for the Group 3 contest. The Al Shaqab owned colt struggled initially, trailing the rest of the field under the guidance of Gregory Benoist.

Once Gregory switched wide, Al Aukair showed a massive change in pace, chasing down Group 1 frontrunner National Defence and defying all the odds. Following his impressive performance at the Prix Djebel, Al Aukair was dropped to a best price of 8-1 for the 2000 Guineas at Newmarket. He goes in as second favourite behind Churchill who is Adan O’Brien’s best shot at 6-4. Confirmation quickly spread that the colt was eyeing the British season classic.

A Big Future Ahead

Speaking to the press, racing manager Harry Herbert said the he watched the race and is clearly impressed with Al Aukair’s performance. Both he and the team think that the colt has a big future. Herbert does feel that the horse is a little bit green but his acceleration is exciting. Herbert said that the horse is held in very high regard but he shows signs of inexperience, which was why they were keen to give him a run at the Djebel.

The team expect the colt to be much sharper for the 2000 Guineas. Jockey Fabre is pleased with the decision to head to Newmarket. He has won the 2000 Guines twice before in 1995 with Pennekamp and in 1993 with Zafonic. Fabre admits that Al Aukair is a completely different horse to Zafonic though. Al Aukair is a more laid back horse but has a lot of potential.

Meanwhile National Defence is looking in good form. As a dominant winner of the Prix Jean-Luc Lagardere, National Defence is a top-prospect for the race. Double Lady was a top contender for the Prix Imprudence but was completely upstaged by her stablemate Via Ravenna under the guidance of Vincent Chminaud. The French jockey completed a stunning hat trick with another win at the Prix Jacques Laffitte. The Goldolphin owned horse completed a brilliant campaign in 2015 but only competed in two races last reason.