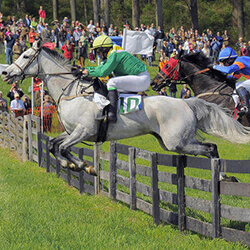 Sea King and Monarch Chimes from New Zealand are the current major threat to jumper Wells’ attempt at a historic victory at the Grand National Steeplechase in Ballarat. Wells is aiming to be the first four-time winner of the famous event, which would earn him both the honour and the $350,000 prize if he wins.

Kathryn Durden, trainer of Geelong, put the 11-year-old through the steeple trial in Cranboune with the hopes of polishing up the horse before the big day. Jockey Richard Cully took the horse to the post more than two lengths clear during practise runs in the trial.

The horse has been commuting between Australia and New Zealand since the start of 2014, and saw victory at the Lafferty and Grand National hurdles in his first two starts, and eventually finished third to Bashboy in the Grand National in Sandown.

Although Sea King hasn’t seen a win since last year July, his current form suggests that he’s more than ready for the upcoming event at Ballarat, and may just steal the win from Wells.