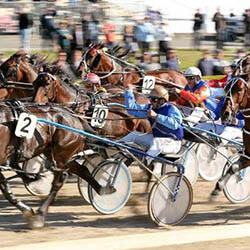 A group of New Zealand harness racing drivers have expressed their dissatisfaction over the sport’s new rule regarding the severe limiting of the use of the force of the whip during races.

The new rule no longer permits the harness driver to remove their odds completely off the reins for any reason – least of all for the cracking of the whip. The only whip-motion that will be allowed going forward, will be a that of a motion by the driver’s wrist.

Officially passed on October 1, the new rule will be in force during next weekend’s New Zealand Trotting Cup headed for Addington. The reasoning behind the new rule is a combination of improving overall safety and a reduction in the force with which the whip has traditionally been cracked.

Those unhappy with the new rule, says New Zealand Harness Racing Trainer and Drivers Association head Ken Barron, are mainly feeling the way that they are because of the common assumption that the previous style of managing the whip had in actual fact been good for the image of the sport. Some people deal better with change than some others, said Barron.

Barron also said that he could sympathise with those drivers unhappy about the new rule as it could be likened to a right-handed golfer suddenly made to compete using only his left hand. The new rule basically asks of the driver to refrain from grabbing hold of the reigns with one hand when making use of the whip with the other.