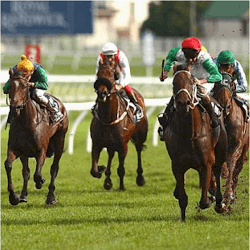 Get Ready for the Peters Investments-Kingston Town Classic

This years Peters Investments-Kingston Town Classic will be held on the 3rd of December and for many it could bring about the Christmas spirit a little early, if backing a winner! The race is the Southern Hemisphere’s richest Group One event and is named after 3 times Cox Plate winner, Kingston Town who’s also been bestowed the honour of being inducted to the Australian Hall of Fame.

An 1800m event, the Peters Investments-Kingston Town Classic is sure to attract a huge audience, both at the course and in front of the TV screen. The race will round off the 3rd and final day of The TABtouch Masters, and will see punters get into the mood with the Christmas Carnivale. If you can make your way Down Under to the Ascot Racecourse in Perth you’re sure to be in for a rollicking good time, but if you can catch the Peters Investments-Kingston Town Classic on TV or live feed, its also sure to be very exciting.

A Fitting End to Group One Races

The Peters Investments-Kingston Town Classic is held a week after the Group 2 Winterbottom Stakes and two weeks after the Group 1 Railway Stakes. It rounds off the season of Group One races for the year and is the middle distance main feature racing event of the Perth Summer Carnival.

The prize money for this race is a whopping $1,000,000 and this alone attracts spectators from all over the country, and across the globe. All eyes will be glued to the track when the boxes open at 11am and Ascot Racecourse is sure to hum with excitement.

The winner of this highly anticipated race generally goes on to compete in the Group 2 CB Cox Stakes, which are run over a 2,100m course.

A Look at Previous Winners

In 2015 Perfect Reflection took the honours of being the Peters Investments-Kingston Town Classic winner, in 2014 Moriarty was first across the finish line, and in 2103 Ihtsahymn pipped the others to the post.

2015’s race was particularly spectacular, with Perfect Reflection leaving the competition in the dust and winning the classic. Prior to this, he also emerged victorious in the Group 3 WA Champion Fillies Stakes, earning a double win.

To date there have been 4 other double winners of both the Peters Investments-Kingston Town Classic and the Railway Stakes, so many will be watching to see if history repeats itself again this year.