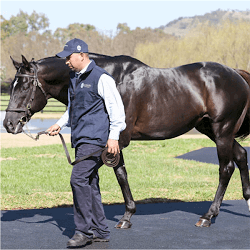 The Peters Investments-Kingston Town classic day, or the final day of the TabTouch Masters, is run each year in Perth. The Southern Hemispheres richest group one race attracts large crowds each year with a variety of grand events such as high fashion, superb entertainment and great food. The million-dollar purse attracts horses and trainers from all over the world, resulting in a day rife with excitement and some seriously good times.

Last year in 2015 the race was won by Perfect Reflection, a dark bay filly trained by Grant & Alana Williams. Perfect Reflection was foaled in 2012, making her only three years old when she won the Peters Investments-Kingston Town classic day in 2015. She has already amassed $1,139,950 in career earnings and is regarded as a member of the most elite classes of thoroughbreds. Her most significant win was the Peters Investments-Kingston Town classic day in 2015 when she beat the super mare Delicacy.

Perfect Reflection has a superb pedigree, with both dam and sire lines going back to some super sires. Her sire, More Than Ready is by Southern Halo whose grandsire is the mighty Hail To Reason. Mr Prospector is found in both her dam lines and her sire lines as is Northern Dancer. Her dam, Reflected Image, is by the stallion Blue Bird who in turn is by the famous Storm Bird. With a pedigree like this, one can expect some great things in this girl’s future. She will be running in 2016 in the Kingston Town Classic.

Playing God won the Peters Investments-Kingston Town classic day on two occasions, 2010 and 2011. He is a dark bay stallion who has since been retired to stud and has a number of progeny which have yet to be tested as they are all still yearlings. He won the G2 WA Guineas and LR Aquanita Stakes before completing a feature hat trick in the G1 Kingston Town Stakes at weight for age. At the age of three, Playing God was already a precocious horse who stormed out of the gates with ten starts. Out of those ten, he won five and was placed in five. This puts him in the same league as other superstars such as Buffering and Crystal Lily. He is the only horse since Old Comrade in 2000 and 2001 to win the Peters Investments-Kingston Town classic day in back to back years.

Playing god is by Blackfriars who in turn is by Danehill. Danehill is by Danzig, the same great grandsire of Buffering. His dam line traces back to Bold Ruler and includes sires such as Rubiton and Taipan. Rubiton is known as one of the greatest current dam sires in Australia.

In total, Playing God ran 42 starts, 8 wins and 11 placings. He had a 49% return to punters throughout his career, making his progeny an exciting prospect to follow in the future.