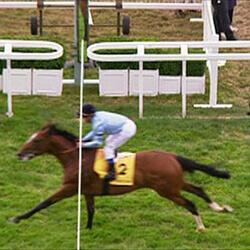 There were tears of joy after Harbinger left the audience stunned thanks to an astonishing victory at the King George VI and Queen Elizabeth Stakes, which took place at Ascot.

The horse claimed outright victory for his rider and his team after beating out all opponents on the track, which consisted of seasoned veterans; two of which were Derby winners, as well as a three-time Arc runner-up. Harbinger’s performance saw him finish 11 lengths in front of his rivals, marking it as the widest winning margin in the history of the race, as well as shattering the mile-and-a-half track record.

One of the biggest disappointments on the track was Workforce, whose run saw him finish second-to-last on the track, which surprised many after the horse’s seven-length victory at the Investec Derby.

Harbinger’s victory is one for the history books after having decimated rivals that were very much top-class, and left many of the audience members in tears.

Oliver Peslier, who was the rider of Harbinger during his incredible run at Ascot, has told reporters that he gave the horse one smack with his whip, and when he turned to check the position of other horses, they were far behind.

Highclere managing director, Harry Herbert, was in in tears himself. He stated to reporters that he feels incredibly lucky to be involved with a horse like Harbinger, especially after growing up watching some of the track’s most famous races throughout the years.