The Prince of Wales and Asian Beau Stakes

The 2017 Prince of Wales and Asian Beau Stakes 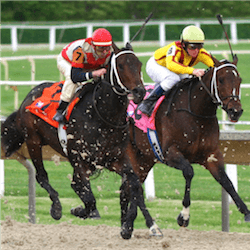 Held annually in October, the Prince of Wales Stakes is run at Ascot Racecourse in Perth Western Australia. It is the first weight for age race in of the new season in Perth. The Group 3 race forms part of the Perth summer racing carnival and coincides with the Group 1 WS Cox Plate.  When it first started, the race was held on Melbourne Cup day but was soon moved to a date in December in a lead up to the Railway Stakes. After clashing with other races on the calendar it was moved back to October.

The Prince of Wales Stakes is run over a distance of 1200 meters and offer up $150,000 in prize money. In 2016, the race was won by Rock Magic with Smoko in second and Battle Hero in Third and this year you can bet on the winner online at Sportsbet.

If you are looking for even more racing action, the Asian Beau Stakes will follow on as the first Group 3 quality handicap of the season. Also taking place at Ascot racecourse, the Asian Beau stakes is run over a distance of 1400 meters with a total prize money of $150,000. The race is ideally suited for horses that are in-form with a lighter weight to beat the handicapper. Competitors that do well as the Asian Beau Stakes have the opportunity to compete later in the same carnival at the Group 3 Colonel Reeves or the RJ Peters Stakes.

Another popular race for runners in the Asian Beau Stakes is the $1,000,000 group 1 Railway Stakes taking place three weeks later. The race typically attracts a field of in-form local horses that are doing the rounds on the local tracks. In 2016, Heart Starter went from winning a BM78+ race at Bunbury before winning the Asian Beau Stakes. Great Shot came home in second while Respondent rounded off the top three.