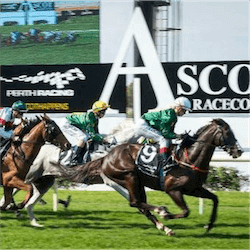 Perth’s Railway Stakes, the first of three Group 1 races every summer at Ascot, is a traditional double with the Gr. 2 Lee Steeres Stakes at Ascot a fortnight earlier. Dating back to 1887, the oldest Gr. 1 race in Perth is run over 1600m for a million-dollar purse, as opposed to the Lee Steeres’ 1400m for $250,000.

However, that particular double hasn’t come off at Ascot since 2006, when Bell Bizarre won both races. Silverstream, the six-year-old mare trained by Adam Durrant, also took a narrow victory in the 1400m Northerly Stakes two weeks before winning the Lee Steeres by a neck against Great Shot and Scales Of Justice.

She’s suffered a terrible rail draw for the Railway Stakes, though, starting from Barrier 16 in a 16-horse race. Online betting sites don’t fancy her to break the drought on the double: she’s eighth in the betting at $15.00.

However, she’s carrying a relatively light weight of 53.5kg, so with Perth’s top hoop, William Pike, riding her, she could still surprise.

The 2016 Railway Stakes winner, Lindsey Smith-trained Scales Of Justice, is top of the betting at $6.00 to take a double of his own.

The five-year-old gelding will be ridden by Douglas Whyte on Saturday, but he’s carrying second-highest weight of 57.5kg.

He’ll also be jumping off from Barrier 13, so his favourite status may be deceptive.

Trainer Darren Weir admits he isn’t sure if Black Heart Bart has another Gr. 1 in him, but he says the seven-year-old gelding is in ‘reasonable’ condition for his return to WA. Black Heart Bart has had a rest and treatment for the foot trouble that cut short his uneven spring season in Melbourne after Caulfield’s Underwood Stakes on 1 October.

Irish gelding Tom Melbourne is also a potential threat, starting from Barrier 1 and carrying 55kg. The seven-year-old is the Railway Stakes third favourite at $7.00.