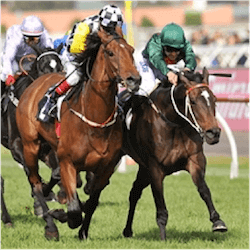 Racing fans will be enjoying the Sydney Autumn Carnival that arrives at Royal Randwick this Saturday, on Day Two of The Championships. Day One last Saturday saw Jon Snow win the 2400m Australian Derby and Chataqua triumph in the 1200m TJ Smith Stakes, and the ATC expects another bumper crowd this week.

Queen Elizabeth Stakes Day has a special significance in the silver anniversary year of the monarch declaring Randwick officially a “royal” racecourse. So naturally, the day features a card with lots of action for punters online, along with the fashion, hospitality and entertainment options that make it such a popular social occasion.

There are two Group 1 races on the card, although the $4-million feature race of the day is one of them, and the result is already a foregone conclusion, according to many bookies and punters. For the 2000m Longines Queen Elizabeth Stakes, in a field of nine, 5-year-old mare Winx is being offered at $1.10 and lower, with nearest rival Hartnell at $11.00.

It’s understandable that so few think any horse can challenge Winx in the Queen Elizabeth Stakes. Her record stands on 20 wins from 26 starts, the last 16 of them consecutively over a variety of distances. Barring foul weather and heavy going, it’s hard to see who can beat her at Randwick, although if the track does get rough, punters have outsiders like Harlem and Sense of Occasion to take a flyer on.

The Queen Elizabeth Stakes Day race that many punters will be focusing on instead, is the next race on Saturday’s card: the Group 1 Sydney Cup over 3200m, for a total purse of $2-million. It has a field of 14, but none with a record as stellar as Winx’s, so racing fans can explore a wider range of betting options.

Irish gelding Big Duke is a clear favourite at $2.60, but many also fancy another Irish gelding, Assign, or New Zealand’s Who Shot The Barman.