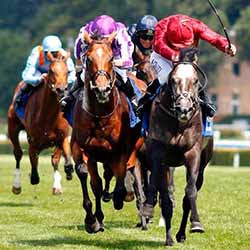 Surgeons started a second operation on Roaring Lion, the horse of the year from last year that has been sick with colic. The colt, who was trained by Newmarket’s John Gosden, was forced to enter emergency surgery during the weekend. He had had another operation later and is currently recovering at the Cambridge Equine Hospital based in New Zealand.

A spokesperson for Cambridge Stud stated that Roaring Lion is an extraordinary horse and a real fighter. It’s believed that the next few days will be critical for the horse as he recovers. Owned by Qatar Racing, Roaring Lion had retired from breeding after he won four top level Group Races in 2019, which includes the Queen Elizabeth II Stakes that took place in Ascot.

Following the win in the Dante Stakes, the horse had been third for the Derby before winning the Coral Eclipse, Juddmonts International, and Irish Champion Stakes while being ridden by jockey Olsin Murphy.

As son of US Champion Kitten’s Joy, the cold had been named European flat racing’s horse of the year ahead of fellow stablemate Enable during the Cartier Awards. Roaring Lion was sent to Cambridge Stud in New Zealand for the Southern Hemisphere mating season after he had begin his stallion duties at Tweenhills Stud based in Gloucestershire.

Symptoms of colic were first detected within 15 minutes of the four year old being released from quarantine, and because equine colic is life threatening, he was immediately rushed to emergency care.