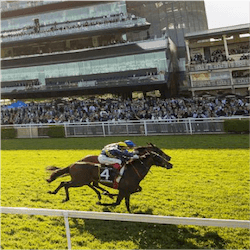 This weekend sees a full day of Spring Carnival racing at Sydney’s Royal Randwick course, with three famous Group 1 races to go alongside the Gr. 2 Premiere Stakes. The Premiere, a 1200m weight-for-age sprint, carries prize money totalling $500,000. The current favourite in the 12-horse field is 7-year-old champion gelding Chautauqua, at $3.20.

The $500,000 Gr. 1 Flight Stakes, now 70 years old, is also on Saturday’s card. The 1600m set-weights handicap is restricted to 3-year-old fillies, and has a field of 11 confirmed. James Cummings-trained Alizee, at $2.80, leads the betting, with Champagne Cuddles at $4.20, and tied third-favourites Cellargirl and Pandemonium at $6.50. You can bet on these and the AJ Moir Stakes online at Crownbet, and see if you can back a winner.

Trainer Chris Waller has a lot of his charges active in Saturday’s two oldest Gr. 1 races: The Metropolitan and the Epsom Handicap, both inaugurated in the 1860s. In the $750,000 Metropolitan, run over 2400m, the joint favourites at $5.00 are both geldings trained by Waller: 5-year-old Antonio Giuseppe and 7-year-old Libran.

Waller also trains the third-favourite, Life Less Ordinary, who is being offered at $5.50. But strong middle-distance gallopers like Broadside at $8.50, Foundry at $7.00 and Big Duke at $6.00 could also mount a challenge.

Epsom Handicap Down to 10 Runners

Waller has had to scratch win-machine Egg Tart from Saturday’s titular race, the 1600m Gr. 1 Epsom Handicap, because the mare has an eye complaint. The Epsom field is now down to just 10 horses, so it could deliver unpredictable highlights on Saturday.

But Waller still has four horses running in the iconic million-dollar one-mile race, including Comin’ Through and Tom Melbourne, who currently share second place in the betting on $6.00. The race favourite, at $2.60, is Patrick Webster-trained Happy Clapper, a 7-year-old gelding.

Kiwi sports betting fans looking for racing action later in October mustn’t forget the Craven Plate at Royal Randwick on 14 October, of course. The 2000m Gr. 3 race, carrying a purse of $500,000, is the last weight-for-age race in the Sydney Spring Racing Carnival, and it is likely to attract a highly competitive field.