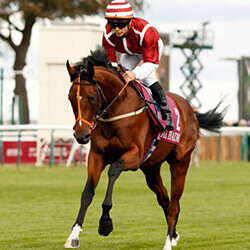 It was recently announced that Salouen is set to participate in the King George VI and Queen Elizabeth Stakes, which are to take place later in July at Ascot.

The four-year old, who has shown consistent riding in the season so far, saw victory at the Coronation Cup at Epsom, where he managed to take on Cracksman, and qualified for future events. He then showed his colours once again at the Grand Prix de Saint-cloud, where he was only beaten by a length and a quarter to come in third place.

Salouen, who is the son of Canford Cliffs, has won only two of his 18 starts so far, both done as a two-year old. Despite this, he has ridden exclusively in Pattern company since then, and will continue to do so as he finds his way through more upcoming events.

Sylvester Kirk, the Lambourn trainer for Salouen, expressed his happiness for the horse to carry on taking on the best company. Kirk told reporters that Salouen is very good, and that he will be in the King George Next. He added that the one thing he was worried about was the horse not getting his head in front due to his slow starts.

Kirk went on to say that there was no guarantee that Salouen would win a Group Three, but that he was in great form nonetheless, and that he wasn’t risking anything by running in the top grade.