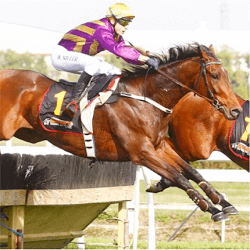 Steeplechasing is not as popular in New Zealand as flat racing, or in fact in anywhere else around the world. That does not mean however that it is a small or badly funded sport. Jump racing was included in the New Zealand industry awards in July 2016, with Champion Jump jockey as well as Champion Jumper being awarded. The super bay gelding Sea King was awarded the jumper category in a tie with Jack Romanov.

Sea King is known as a rogue horse that was actually banned from a number of tracks in his younger years. Jump horses tend to race at more mature ages than flat racers, due to the more extreme pressure and wear and tear that is exerted by jumping as well as galloping. Rachel Frost, a jumps trainer and his owner used to call Sea King a thick, horrible goat due to his bad behaviour towards other horses and his lack of concentration on the track.

Known to lean on other horses, as well as try to jump on them over fences, Sea King was tried in a number of gadgets to break his habits. Nothing worked however until late in 2013 when he seemed to just grow up and get over everything.

Sea King became the first horse to win both the Waikato Hurdles and Waikato Steeples in 2013. He defeated his main competition, Carinya, by seven lengths. Since then he has not looked back, proving himself to be a great stayer as well as a super jumper. He enjoys work away from public tracks, and excels at forest and road training that he seems to find more interesting.

Sea King has had a long and rather interesting career so far.  His first season was only one start, in which he came second carrying 60.5kgs. Jump racing horses carry much heavier weights than flat horses as well as racing much later into their careers.  His next few seasons saw only a couple of weeks off for quite a while, with a few fresheners and only two spells for most of his career. He changed trainers in June 2016, just after his win at the Industry awards. That did not last long however, as he transferred back to Patrick Payne.

Sea King revels in heavy going where other horses find it rather heavy. He has been jumping over the lower fences up until now, but the nine-year-old gelding is being pointed at the higher races, including potentially the Grand National.

He has been surprising popular recently with his new attitude and winning ability, as well as proving profitable at the bookies. Backing Sea King over is career so far would have returned a 58% profit. In his last race, he unfortunately made contact with a piece of railing on the edge of the track, which caused him to leap into the air, unseating his jockey. He sustained lacerations to his chest and is subsequently being spelled.