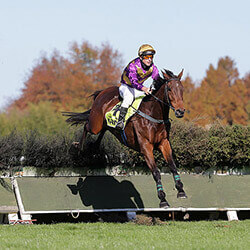 Twelve-year-old Sea King saw victory at the E-Cycle Solutions Grand National Steeplechase after running down his biggest opponent, Spying On You. The final stride of the event at Ballarat proved to be a dramatic one as Sea King pulled out ahead just in time.

Kathryn Durden-trained Wells, looking to earn his fourth Grand National win, dislodged jockey Richie Cully on the third of the 16 obstacles, and shattered his chance for the title.

Former Steeplechase winner Excellent Rhythm saw similar luck after a good start, and was eventually outpaced in the final stretch of the event. The home straight saw three runners left: Spying On You, Sea King, and Monarch Chimes.

Spying On You, carrying New Zealand-based Aaron Kuru, had managed to outrun Kiwi Monarch Chimes, but soon had to content with Patrick Payne-trained Sea King. Sea King, who had lost his challenge against Wells during the same event last year, was determined to fight for the win.

After crossing the finish line, ecstatic and overwhelmed rider Steven Pateman explained to reporters that while he was sorry that Wells lost, it was just how the game played out. He added that Sea King was a champion horse, and that he’s grateful to both Patrick Payne and Kevin Myers.

Payne has confirmed that Sea King’s latest win is also the last event of his career, and that he will be retiring with 20 wins from 77 starts under his name, and just $1280 short of $1 million in stakes.