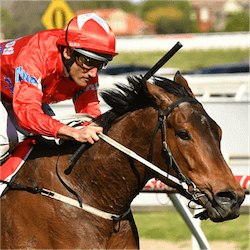 Melbourne trainer Mick Price pulled off his fourth win at this year’s Robert Sangster Stakes with Secret Agenda scoring an upset at the Morphettville Racecourse. The four-year-old mare went into $1 million Group 1 Robert Sangster Stakes at odds of $16 in a capacity field. The daughter of Not A Single Doubt was drawn wide and bookies were sceptical of her chances despite having picked up a win at the Group 2 Sapphire Stakes at Randwick in April.

Damien Oliver was in the saddle, managing to post his second victory in the Robert Sangster Stakes after riding Alinghi to victory in 2005. For trainer Mick Price, Secret Agenda was his fourth victory at Morphettville following victories with Bel Mer in 2009, French Bid in 2004 and Spirit of Love back in 1998. Continuing the historical record of wins for four-year-olds, Secret Agenda started well out wide and settled into second place behind the Oakleigh Plate winner, Sheidle. With Joao Moreira in the saddle, Sheidle flew out of the gates and led the race from Secret Agenda and Super Cash.

I Am A Star, the Myer Classic winning filly from Shane Nichol was also among the leading pack, improving on her eighth place at the AD Hollindale stakes to race winner Its Somewhat. Coming into the turn, Secret Agenda moved up to take the lead, putting her head down as she headed down the straight. One or two challengers came close to Secret Agenda but she managed to stay ahead for Oliver to take the win ahead of in-form Viddora who was fresh off a Group 3 RN Irwin Stakes win at the same track two weeks earlier.

Taking third place at the Robert Sangster Stakes and rounding off the trifecta was I Am A Star. With another win in the bag, Mick Price could possibly head up the Brisbane Winter Racing Carnival with Secret Agenda. The four-year-old is nominated for two Eagle Farm features including the Group 1 $700,000 on the 27th of May as well as the Group 1 $1.5 million Stradbroke Handicap one month later.