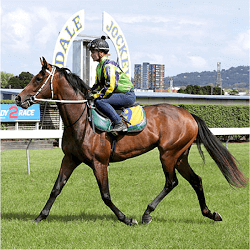 The pretty bay mare Sofia Rosa won bloodstock filly of the year for 2016 at the New Zealand industry Awards. She was also nominated as a champion three year old, but lost out to Xtravagant. At the end of her three-year-old season, Sofia Rosa had already won five races, a number of which were group ones. She continues to race into her four-year-old season so far, although her last couple of races have been disappointing.

Sofia Rosa is a superb filly, both in looks as well as racing results. She started her career at two, winning her second start in soft conditions at Hastings. She does not, however, have a temperament to match her look or her race record. She is known to both kick and buck, giving her the rather unflattering nickname The Rabid Bush Pig. Blindingly fast, if you can stay on, Sofia Rosa has won at numerous races in New Zealand but only one so far in Australia. Many New Zealand horses have unsuccessful careers or slow starting careers when they go over the Tasman Sea, with some notable exceptions.

She ran tenth in the Memsie stakes, purely because she played up at the barrier, and had to be checked rather hard early in the race. The Makybe Diva Stakes weren’t any better, with her coming in ninth out of thirteen, beaten by gelding Black Heart Bart on both occasions. Her trainer says that she has the potential to be a winning racehorse, if she can stop being such a nutcase. She has been described as feral, hating everything including other horses and humans.

Sofia Rosa may have a future as a racehorse, or may not. It all depends on her. If she settles down and begins to perform to her potential the pretty bay will most likely continue to race. If she continues her antics, however, she may not. She was put out to pasture at the end of 2016 after her rather dismal results in Australia, and her trainer Stephen Marsh is optimistic about her racing future. She has lost her winter coat, which she failed to do throughout most of late 2016 when other thoroughbreds were already looking sleek. The paddock seems to have done her well, so hopefully she will entertain the crowds with more of her antics in days to come.

It is possible that Sofia Rosa will go on to become a top broodmare in New Zealand if she doesn’t continue to win as a racehorse. The mare has top breeding, and as long as her foals get their temperaments from their fathers and their talent from both parents, they should be top runners. Foals often inherit their sires temperament and their dam’s conformation or talents, which luckily bodes well for Sofia Rosa’s broodmare career.