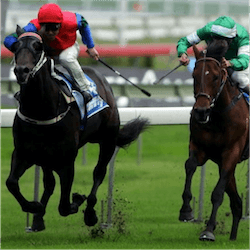 This year is the fifth in which the Spring Champion Stakes gets its own meeting at Royal Randwick, after being split from Epsom Day in 2013. It promises another vibrant Spring Racing Carnival event at the Sydney course this Saturday, in a meeting that has two other popular races, in Groups 2 and 3, to go with the Gr. 1 titular feature.

Online sports betting fans will have the 2000m Spring Champion Stakes for 3-year-olds to focus on, with a confirmed field of just nine. There is also the Gr. 2 Roman Consul Stakes for 3-year-old sprinters, and the Gr. 3 Angst Stakes for mares, to consider. All three are run at set weights with penalties, and the main race has a $500,000 purse.

Drawn well in Barrier 4, the colt Ace High is the favourite, at odds around and below $3.50, to win Saturday’s main race, which only has nine horses in the field. Sired by Irish great High Chaparral, Ace High took a win over 1800m two weeks ago at Rosehill.

He’s followed in the betting by Sanctioned, at around $4.80, and then Tangled at $5.00 and above. Sired by Snitzel out of Bramble Rose and trained by Chris Waller, Tangled’s Barrier draw of 2 could make him dangerous, although he has never raced over a distance this long. At around $8.00, $9.00 and $10.00 respectively, Astoria, Sully and Dissolution are the best of the rest.

The scratching of Snitzcraft has left the 1200m Roman Consul Stakes with an even smaller field. Of the seven horses remaining, James Cummings-trained colt Viridene, who debuted this year with an impressive 3: 3-0-0, is the favourite, at odds going as low as $2.70. However, Single Bullet, Chauffeur, Beau Geste and Albumin are all at below $10.00 in the tiny field as well, so it could be anybody’s race.

The 1500m Angst Stakes, restricted to mares, has fared better, with two scratchings still leaving 12 mares running. Ron Quinton’s two 5-year-olds, Dixie Blossoms and Daysee Doom, are neck-and-neck in the betting; both at below $5.00, with Dixie Blossoms marginally the favourite.