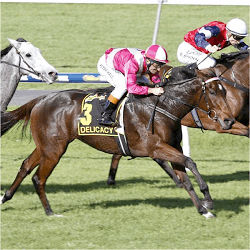 The TABtouch Perth Cup Day Horses Past and Present

Delicacy is a bay mare that won the last TABTouch Perth Cup Day at the beginning of January 2016. A superstar in the long distance world, Delicacy’s last race was, in fact, the 2016 Perth Day Cup, which was run on the second of January. After winning the race she pulled up lame with heat in both forelegs. Torn tendons were the diagnoses, which resulted in her immediate retirement. She was only four years old when retired, but has a promising future as a brood mare with owner Bob Peters.

Delicacy first ran in her three year old season, being named champion three year old filly at last year’s Australian Racehorse of the Year awards. Races in her first season included the Derby and Oaks double in Western Australia. She retires as the winner of 12 of her 19 starts for prizemoney of more than $2million. If you had backed her over her career, you would have had a whopping 123% return on your investment. Her future foals will definitely be worth watching.

Delicacy is incredibly well bred out of a mare called Simply Wicked who’s grandsire is Saddlers Wells. Her sire is Al Maher who is a Danehill, Danzig stallion. The Danehill Danzig line is the same as the super star stallion Playing God.

Real Love is a chestnut mare, foaled in 2010, who won the TABtouch Perth Cup Day in 2015. She was trained by Darren Weir based in Wangoom. She has won over distances from 1400 to 2600 meters with four of those races being group ones. Real Love is a top class long distance runner, with 7 wins, 4 seconds, 6 thirds from 24 starts with a lifetime career prize money of $1,140,410.

Owner Bob Peters, who also owns the super mare Delicacy, had planned to retire Real Love at the end of her five year old season. She did so well in the Brisbane cup however ending in fine fettle, that he has decided to let her run for one more season. Known as one of the toughest mares currently on track, Real Love looks set for another great season of racing, and may very possibly be in the field for the 2017 TABtouch Perth Cup Day.

Real Love’s pedigree is similar to many superb past winners of many races around Australia, including super mare Delicacy. Her sire, Desert King, is by Danehill who is by Danzig. This is the same line as Playing God and Buffering. Her sires dam, Sabaah is by Nureyev who is by the most famous sire of all time, Northern Dancer.