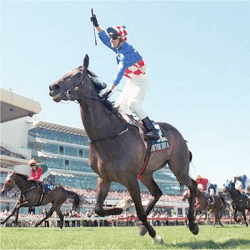 Takedown is a bay gelding who was born on 22 September 2012. Trained by Gary M Moor, Takedown is Gary’s first group one winner and looks set for a super career in the future. He is flying to Hong Kong on the heels on his Winterbottom Stakes win at the end of November 2016, where the Australian thoroughbred will be pitted against other international super stars of the equine world.

His win in Perth wasn’t unexpected, but he was up against some fierce competition and managed to come out on top, pleasing both punters and his trainer.

Takedown was born at Widden Stud in Australia, and is described as a gentle giant. The big bay with three white socks raced his first race on the 14th of February in 2012 at the Kembla Grange track. He ran third, immediately proving his trainers and owners initial excitement correct. From there he ran four races, coming first in three of them. His last race of his three year old season was run at Randwick, where he came in seventh. Realising that his prodigy needed a rest, Gary Moore gave the gelding a spell off for 154 days.

Takedown’s first race was back at Randwick, in the Champagne Stakes. Proving his trainer a wise man for giving him the time off, he ran a solid third. The rest of his three year old season was a bit disappointing with a 4th, a 6th and a 7th. He was then spelled for a further 126 days before returning for his four year old season.

Takedown’s four year old season opened after 126 days off with the Fireball stakes, once again at Randwick. Takedown came into his own at the age of four, and Gary pushed him to run more races than he previously had per year due to his more mature physique. Initially, he ran 6 races, coming in no less than fourth until the 6th of July 2016 where he ran 14th at Eagle Farm. Another spelling spell saw his strong comeback which culminated in the Winterbottom Stakes win at the end of November 2016. He beat the talented mare Sheidel by a neck in an incredibly close finish to win the Winterbottom Stakes in Perth. The second part of his 2016 season had no less than three firsts, a second and a fifth.

Takedown is by the stallion Stratum who is in turn by the huge Redoute’s Choice. Roudoute’s Choice has the incredibly successful Danehill Danzig line as his sire line. Most of the winners of the Winterbottom stakes in recent years have had the Danehill Danzig line either as direct sire line or dam line. Takedown’s dam is by Zafinoc who goes back to Mr Prospector. Mr Prospector is another very well known sire line for successful runners.

Both the runner up to the 2016 Winterbottom stakes, Sheidel, as well as last years winner the filly Special Reflection have the Danehill Danzig sire line. This line has proven successful again and again not only in Australia, but all over the world.