The Thompsons Are At It Again 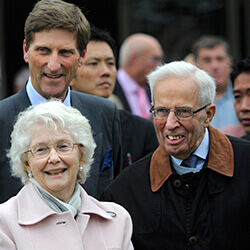 Seeyouatmidnight, who has a shot of 16-1 of winning the Saturday Randox Health Grand National at Aintree, Liverpool, Merseyside, England, has just been purchased by David and Patricia Thompson of Cheveley Park Stud Farm.

The Thompsons are famous for their last-minute purchases. Their last one was Party Politics. They acquired him the day before the Grand National of 1992, and then sat back and watched him race into the history books to take first place!

In 2017, Seeyouatmidnight, who has taken the scalps of Blaklion, Bristol de Mai, and Regal Encore, strained his suspensory ligament, and his comeback this season got held up by foul weather, which saw him unable to run until Newbury, just over two weeks ago.

Sandy Thomson, his trainer, was understandably frustrated by the delay, but is much more positive now. In fact, he said that he was delighted with Seeyouatmidnight!

Sandy said that at that time he stated that they couldn’t afford to miss a day, and they haven’t. He spoke of his horses improving for the run, and the fact that Seeyouatmidnight was taken to Newbury, instead of Carlisle or Kelso, may well have been a good thing. He said it gave them an extra week to work on the horse, and Sandy felt that getting him away for those days was good for Seeyouatmidnight too.

Nigel Twiston-Davies’ second-string, behind Blacklion, Double Ross, was the final horse to be guaranteed a run in the race on Saturday after seven were withdrawn.