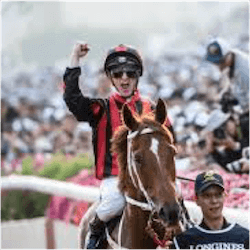 Time Warp Cruises to Victory at the Hong Kong Cup

Time Warp, the former Sir Mark Prescott trained gelding was given the ride of his life as he took the honours at the 2017 Hong Kong Cup at Sha Tin. Since shipping out of Britain in 2015, Time Warp has been under the guidance of trainer Tony Cruz. His move to the Far East was not an easy affair with seven successive losses before finding any sort of form.

With patience and a little bit of time, the son of Archipenko began showing signs of promise and his rise to the top was completed this past weekend with a magnificent win over Hong Kong Star, Werther by a massive two and quarter lengths. Time Warp’s inspired win was yet another big result for jockey Zac Purton who can cross off the Hong Kong Cup along with the other three Group One Races that comprise the four Hong Kong Internationals.

Soon after the gates opened, Purton took Time Warp straight to the front and set a steady pace. With Time Warp alone out front, the O’Brien-trained Deauville settled in on the rail while Robin Of Navan raced alongside. Though it seemed as if the two could challenge, Purton pushed it up a gear and the two challengers fell away in the straight.

Local Favourite Werther had a decent run down the straight but was just not able to catch up with Time Warp as he belted his way to the finish. Neorealism, who was steadily moving to the front, came in third. As for the rest of the European contingent, Poets Word fared the best. Having to race wide around the bend, Poets Word tried to challenge down the middle, but like the others, lacked the acceleration, eventually coming home in sixth. His rider, Andrea Atzeni said he thought the ground might have worked against him. Having been forced wide, the found the ground quicker than he may have liked.

Aiden O’Brien’s other runner, War Decree was never able to keep with the pace. His rider, Seamie Heffernan said that while he had shown promise at home, he has never been able to reproduce it at the track. As for Blond Me, the Andrew Balding mare got pushed to the back of the pack and was never able to mount any sort of challenge. Her rider Oisin Murphy was not too disheartened with the last place finish. He said that while it was not her best race, she has had a great season.