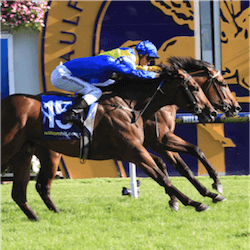 Melbourne Racing Club as always, will be the host of three of the finest horse racing events this year in the Blue Diamond Stakes, the Futurity Stakes and the Oakleigh Plate.

The Lindsey Park team is one of the stables to watch as they have three of the contenders that are earmarked for the top 4. Horses to look at in this year’s Blue Diamond stakes include Extreme Choice, Flying Artie, Tulip and Catchy.

An Impressive Line Up

This year’s Blue Diamond events start off with the 100m Blue Diamond Previews that take place on Australia Day. This event is followed up with the 1100m preludes and then finally the main 1200m event on the 25th of February.

The son of famed stallions, Snitzel, named Chauffeur is being eyed by many racing fans as a potential Oakleigh Plate Champion. Snitzel has already sired 48 winners of 106 races so hopes are high with trainer Gerald Ryan.

Chauffeur has so far won his first-up during his Rosehill performance. He was third behind against From Within at Canterbury and hopes are high for the rest of his season.

Turn Me Loose Looks for Another Win

The upcoming Futurity Stakes will see the title defence of last year’s champion, Turn Me Loose.

Although Turn Me Loose had trouble this year with a very wet winter preventing proper spring preparation, his trainer is still very much in great spirits when talking about the future. The trainer, Murray Baker, stated that Turn Me Loose is performing as great as he always has.

He is set to open the year first with the 1200m Australian stakes, then move on to the 1400m CF Orr Stakes and finally on to the 1400m Futurity Stakes on the 25th of February.

Baker further stated that Turn Me Loose performed exceptionally in the same races the previous year and he has no reason not to believe that another stellar performance is on the cards. Furthermore Turn Me Loose was also awarded at last year’s New Zealand Thoroughbred Racing Awards. He walked away with the Champion Sprint as well as the Champion Middle Distance awards and was a finalist for the Horse of the Year in Victoria.

Turn Me Loose has also previously won the Sofia Cup, The Crystal Mile as well as the Emirates Stakes.

These three events are set to offer racing fans great action in February with some of the finest racing around.