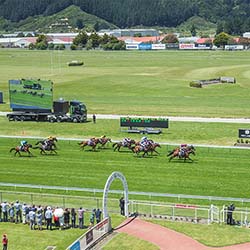 The man who had walked onto a Trentham Racecourse right in the middle of a Wellington Cup race earlier this year, only narrowly avoiding being trampled by horses and their riders, has been charged and convicted by the Hutt Valley District Court.

Justin Bergman, 24, claimed to be an animal rights activist who took issue with the horse racing industry, but was accused of having attempted to “spook” the horses by his “drunken mad” behaviour by the judge instead. Judge Craig Thompson in Thursday convicted and discharged Bergman on one count of disrupting a public meeting, and convicted and charged him with committing a criminal nuisance.

Thompson ruled that what Bergman had done could only be explained as a moment of madness fuelled by alcohol. According to a police summary of the events that took place at Trentham on January 30th, 2021, the 24-year-old had been consuming alcohol all throughout the day before leaving the stands at around 4pm on the day. After gaining access to a private zone where horses are assembled pre-race, he reportedly started yelling at the horses to try and scare them. His spook-tactics also involved him perching on a barrier and making loud “growling” noises, heard the court.

The minute race eight began, Bergman reportedly leapt over three fences before walking nonchalantly onto the track. Many of the 18 jockeys had to swerve in order to avoid a collision with either Bergman or each other.

According to a police investigator’s testimony, Bergman at the end of his stunt lifted his arms towards the crowd as if celebrating a victorious moment.

Thompson on Thursday ordered Bergman to attend counselling, as well as to pay $8,800 in reparations. He’ll also be spending 100 hours doing community service.