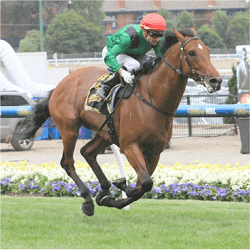 Turn Me Loose won two awards at the New Zealand Industry Awards in 2016. Both Champion Stayer and Champion Sprinter went to the bay colt that has had a number of starts and wins over his four year long racing career.

Turn Me Loose has proven to be an elite racehorse, competing in and winning a number of Group One races and amassing a total of $1,501,103 so far. Backing him to date would have given you an 81% return on your investment, making Turn Me Loose a profitable horse not just for his owners, but for punters too.

Being a New Zealand bred horse; Turn Me Loose began his career at local tracks, achieving a first and a second in a maiden stakes and a handicap race. The first place was in heavy going, with the colt still running ahead of the field proving his versatility. After a brief lengthy rest of 112 days in order to grow a bit, he was entered into a handicap at Hastings, where he ran second. His trainer felt that he needed just a bit more time, so he had a brief freshener of 35 days in which he still did track work to maintain fitness.

His three-year-old season was short with only three starts after which he had a good long spell for almost 300 days. In those starts he had two firsts and a third. Turn Me Loose could have been raced further, but trainer duo Murray Baker and Andrew Forman decided to rather be conservative with the colt in order to have a stronger chance at the later, bigger races such as the Caulfield Cup

The opening round of his four-year-old career after nearly a year off was not incredibly successful, although he did run against champions such as Whoshotthebarman and Hartnell. A quick freshening preluded a winning streak after that, however, with a string of firsts in major Group One races including the Group One Emirates Cup against Politeness and Rock Sturdy on soft ground.

From there he won the Futurity Stakes at Caulfield, but unfortunately his four year old season was cut short by an injury running in the Doncaster Cup against supermare Winx.

Turn me loose has had a slow five-year-old season since being voted Champion Stayer and Sprinter of the year. Two eighth places in Australia in a Group Two and Group One race may be improved on, but seeing as he has returned from an injury that outcome is unsure. Luckily, due to being a colt, he has a future prospect as a sire and may yet become a champion in his second life.

Turn me Loose’s sire, Iffraaj, has had great success in the southern Hemisphere with seven Stakes winners and a number of Group One performers. He is an incredibly good-looking stallion, who passes on his looks to his progeny, which bodes well for Turn Me Loose as a stallion himself.