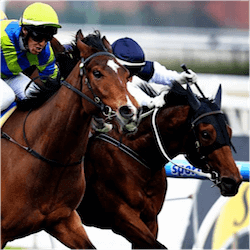 Trainer Mick Price is set to put his young horse, Lone Eagle through its paces at the upcoming Vain Stakes. Mick picked up the 3 year old at the 2016 Magic Millions sale. The Zoffany colt has had a few races and is yet to make a massive splash, but he is still young and Price sees allot of talent in him.

While Lone Eagle is currently in the paddocks on a break, he is set to return for the $150 000, 1100m Vain Stakes. His previous accomplishments include a win against Evil Cry during their 2 year old handicap race. Price will only be targeting 3 year old sprint races with Lone Eagle, with no plans to push him over a mile.

Price’s ideal is to have Lone Eagle run the Melbourne Cup Carnival on Victoria Derby Day, ideally in the Coolmore Stud Stakes, but before he can attain that goal, Lone Eagle will need to perform well at the PB Lawrence undercard, the Vain Stakes. Lone Eagle will also be joined by veteran stablemate Cao Cao.

The two year old Merchant Navy, trained by Ciaron Maher may also be competing at the Vain Stakes. The unbeaten horse was originally scheduled for a Group 1 Golden Rose and Caulfield Guineas contender but he has shown that sprinting distances are his strength. It depends on how Merchant Navy trials, but he may also be joined by his stablemate Jukebox at the Vain Stakes.

Maher also has plans to push her sprinters through to the Coolmore Stud Stakes, but they will need to overcome the PB Lawrence hurdles first. Both horses may be young but they have certainly put on allot of muscle and could be real contenders next weekend.

The Vain Stakes should bring bettors the best of Group 3 action. This fast paced run usually shows the best sprinters to back for the upcoming Coolmore Stud. With its massive prize pot of $150 000 its more than a bit of loose change and generally it helps set the tone for the rest of the Spring Carnival.

Heading into the Vain Stakes, the current top trainers and jockeys are: