Vega Magic Picks Up The Win at Goodwood 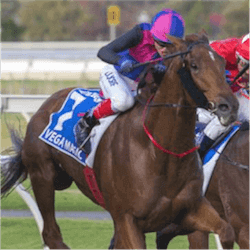 Vega Magic, the second favourite to win the Darley Goodwood at $4.80, showed punters and horse enthusiasts exactly how much potential he has for the future when he charged down the straight to win the $1 million Group 1 race by three-quarters of a length.

Vega Magic managed to pull of something special after being headed by Missrock with the end in sight. Casino Wizard, the Southeast galloper who was sitting at odds of $61, ran the best race of his life, picking up third place, just one length behind the winner. Meanwhile, race favourite, Black Heart Bart ($4.00) finished in a disappointing seventh place, two and a half lengths away.

This is only the second time that the Lindsay Park stable has picked up a win at the Goodwood. Colin, the family patriarch claimed the first feature win with Romantic Son back in 1971. Speaking to the press, David Hayes said that Vega Magic has shown all the qualities of a top horse upon his arrival at the Eura training facilities 10 weeks ago.

Jockey Craig Williams was filled with enthusiasm for the trainer, predicting a big future for the horse. Williams said that he jumped on Vega Magic twice at Flemington and loved the way he went. In Goodwood race, Vega Magic gave him a lovely ride, something that fills him with confidence for the Future of Vega Magic.

Third place, Casino Wizard’s trainer, Lee Creek has said that he was extremely proud of his six-year-old but also a little disappointed after a what happened in the straight. Creek said that the horse had a super run even after people were jumping off him for this season’s campaign.

For the most part, the money was bang on in the Darley Goodwood with Veg Magic proving his worth. Sitting just outside the leader for most of the race, Vega Magic moved from $6.50 into $4.80, before picking up the win. At the start of the race, Vega Magic had been one of the best backed horses along with Secret agenda and race favourite Black Heart Bart.

According to the stats, the Darren Weir trained horse was responsible form almost half the bets on the race. Missrock ($23-$26) looked to have an excellent winning chance but faded in the end while Casino Wizard ($61-$81) held onto third spot head of Secret Agenda.