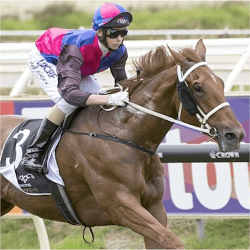 Vega Magic is a chestnut gelding foaled in 2012. He is as yet very young but there are high hopes for his future as he has generally been at the top of his class. His most recent race was the Winterbottom Stakes at Ascot in Australia, where he came in seventh out of twelve. Sadly this was not the result punters were hoping for, and he certainly didn’t live up to his reputation.

The tall, lanky gelding is by Lope De Vega, an Irish stallion and out of a Magic Albert mare. He is currently trained by Sean Casey and ridden by Casey’s teenage son Jake. The horse has had fourteen starts so far, eleven of which he has come in first. Other than at the Winterbottom- Stakes, Vega Magic is proving himself a force to be reckoned with and barring any disasters this is definitely a horse to keep your eye on in the future.

Many horses are very lightly raced in their three year old season and not all during their two year old season. Vega Magic proved to be a very early maturer, giving his trainer Sean Casey a few great runs at the tender age of two. He had four starts when he was rising three, two of which he won and the other two coming in second and third.

Seventeen weeks of rest allowed him to grow into a three year old frame. He returned in fine fettle to win all three tests he was pointed at with Jake Casey aboard. A quick three week break and he again won at Ascot carrying 55kgs over 1200 meters.

Sean Casey then gave his champion another long spell of 14 weeks to take full advantage his growth. The beginning of the four year old season saw four starts so far, two of which were firsts. The most recent race at Ascot, the Winterbottom Stakes, saw Vega Magic coming in a rather disappointing seventh. This is especially surprising after his win at Ascot less than a month before. It remains to be seen if Sean Casey will give his champion a freshener or take a shot at another race in the near future.

Vega Magic is by the stallion Lope De Vega, who is an an Irish chestnut based in France but shuttles to Australia for a part of the breeding season each year. Lope had a decent racing career himself, although he never ran outside France. He was known for his wins over 2000 meters and was only beaten for the first time in his three year old season. Vega Magic is just one of his progeny which are performing well on the track.

Vega Magic’s dame has the famous Danehill sire line running through her.  She had a few starts herself, with five placings, two of which were firsts. She was retired early to be a brood mare and has foaled a number of good horses. The 2005 mare still stands in Australia.