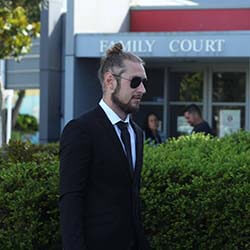 A 24-year-old man accused of running onto the track at the Trentham Racecourse while the race was already in motion on Wellington Cup Day, has been charged and has appeared in court.

Justin Bergman is being charged with committing a criminal act of nuisance and endangering the public after he jumped the fence and ran onto the track area, causing jockeys to have to swerve around him so as to avoid a collision. Bergman is also being charged with disrupting an official meeting in a public place. If convicted, he could face a maximum term of one year behind bars, as well as a $200 fine.

A registrar at the Hutt Valley District Court on Thursday morning remanded the wrongdoer on bail without plea. Bergman is due to reappear at the same court on March 4.

According to horse racing broadcaster Aiden Rodley, sirens could be heard sounding after race eight after Bergman rain onto the track and then proceeded to stand still as the field of jockeys and horses swerved and raced around him. He then proceeded to try and leave the premises by jumping back over the fence, but was stopped by police and taken into custody.

While no one was injured as a result of Bergman’s irresponsible actions, he now faces not only time behind bars, but also a lifetime ban from tracks around New Zealand. According to New Zealand Thoroughbred Racing legal counsel James Dunne, such a ban would come into effect just as soon as all court processes were finished.  Dunne said Bergman endangered not only his own life.