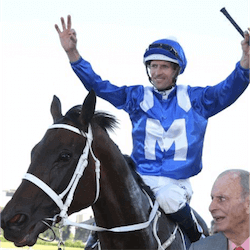 Winx has done it again. In front of the biggest crowed Royal Randwick has seen in years, the super mare extended her brilliant winning streak that now stretches back two years. Romping down the home stretch, the super mare cruised past the finish line to claim the Group 1 Queen Elizabeth Stakes. Chris Waller, her trainer was overcome with emotion after the race saying that she is doing great things for racing and that people will remember her for the rest of their lives.

Giving all the credit to the mare, Waller said that Winx made him look like a genius. He also praised Hugh Bowman, the jockey who guided Winx to her 17th straight win in the group 1 $4 million race. Waller went on to say that Bowman was definitely part of Winx and that what he has done with the mare is very special. He capped it all off by saying that it was a privilege to train such a champion horse.

A Flawless Ride for Bowman

Winx went into the race a firm favourite at odds of $1.12. It was hardly surprising then when she romped home a full five lengths clear of her nearest rival Hartnell who was sitting at odds of $18. Sense of Occasion ($151) completed the top three coming in a neck further down the line. On the day, Winx managed to bring in 26,801 visitors to Randwick, the biggest crowd anyone has seen in the modern racing era. The number of people who turned up to see history in the making even eclipsed the 25,535 odd people who saw Black Caviar claim her final win a the 2013 TJ Smith Stakes.

Jockey Hugh Bowman gave Winx an absolutely flawless ride. Settling off the fence, Bowman took her wide at the 600-meter mark and opened up an incredible margin that her rivals were just not able to chase. In winning the Queen Elizabeth Stakes, Winx has now racked up a total of 17 consecutive wins, trailing only Ajax on 18, Desert Gold on 19 and Black Caviar on 25 as horses with the longest winning streaks.

During her recent winning streak, Winx has picked up a total of 12 Group 1 wins and is fast approaching Black Caviar’s record of 15 Majors. Her total prizemoney was boosted to a massive $12,708,930, second only to Makybe Diva who holds the record at $14,526,900.