Winx Has Her Sights On Yet Another Cox Plate 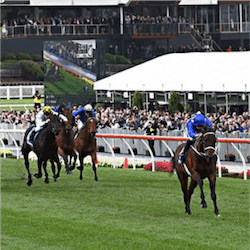 It’s that time of the year again, every Australian and international horseracing enthusiast’s annual dream come true: we’re referring to the W.S. Cox Plate, of course.  Australia’s second richest weight for age race, the Cox Plate is run over a distance of 2040 metres and was staged for the very first time back in 1922.

Only 9 horses are selected to compete in the prestigious event with many hopeful contenders falling by the sidelines each year.  This year’s successful applicants are:

Winx And Her Date With Destiny

Two time Cox Plate winner (2015 and 2016) and absolute supermare Winx will be competing again this year and is a likely candidate to be matching Kingston Town’s official record of a Cox Plate three-in-a-row.

The Chris Waller trained mare has completed her final preparations ahead of Saturday’s race and is believed to be ready and in top shape.  Winx is currently on a 21 race winning streak and will hopefully make it a cool 22 at Moonee Valley on Saturday.  In the event that everything goes according to plan, Winx will officially surpass Makybe Diva as the highest prize money earner in Australia’s horseracing history.  She will also match Black Caviar’s stellar 15 Group 1 victories.

Wallace is optimistic yet careful not to be too over-confident ahead of Saturday’s Cox Plate, saying that there is always a measure of uncertainty with any sportsman- or horse and that one remains aware of everything that could possible go wrong, because the truth is that a lot can.

Jockey Hugh Bowman has said that he is most impressed by the way that Winx has developed and grown professionally over the last three years and that her third attempt at yet another Cox Plate victory may very well end up being her best attempt yet.

Whether increased muscle capacity makes a professional race horse stronger or not is debatable, as is the case with conventional human athletes.  However, it does make the athlete a great deal stronger, and with strength and stamina comes explosion and endurance.

Winx is the undisputed race favourite to win the 2017 W.S. Cox Plate.