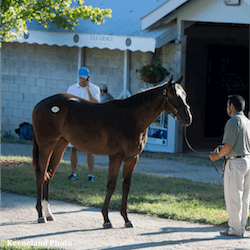 2017 is the 91st Annual Yearling Sales Series, hosted each year at New Zealand’s Bloodstock event in Karaka. This is in the lead up to the legendary annual Auckland Cup Week that will be hosted from the 4th of February.

This year features over 1300 new yearlings that will be sold to the highest bidder. They are divided up into three sales sessions and the buyers are from all over the world.

New Zealand has a long tradition of fine racing stock and international buyers know this. That is why each year the flock to Karaka for a chance to buy or even just see the fine stock on offer from New Zealand’s top breeders.

The event was officially opened by Prime Minister Bill English on Monday.

For yet another year in the row, Waikato Stud has had immense interest in their stud selection. They have fast gained a reputation for fantastic stock.

They have won the accolade of Leading Vendor three years in a row now and this year seems to be no exception of pre-sales interests alone is taken into account.

The principal of the event, Mark Chittick said that the run up to the event has been very stressful with the tough timelines and complex logistics involved, but at the moment he is simply waiting for sales to officially open.

He said that this time they have now is to focus on the main reason they are there in the first place: To present and hopefully sell the next prospective racing champion.

They have 90 horses that will be on sale and almost all of them are owned by the stud so they will definitely hope to sell all of the fine horses.

To further sweeten the pot, this year’s yearling will be the final stock fathered by the late horse, O’Reilly, who was not just essentially as a breeder, but his championship-p wins also played a key role in the creation of Waikato Stud.

When asked which of the stock is the best, Chittick is loath to answer, but did single out the Savabeel filly, Daffodil. She is already a multi group 1 winner.

Meanwhile, Cambridge Stud, run by Patrick Hogan is trying to reclaim their title as the lead vendor. They had previously held the honour for 31 consecutive years.

Hogan also does not wish to pick any of their stock this year as exceptional by themselves but he did mention that Superefficient and Diamond Like will be horses to watch in the coming years.