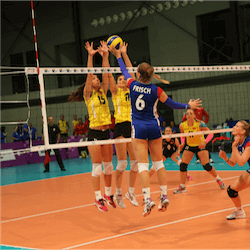 Despite their best efforts and a welcome return to the GSSE, Malta’s women’s volleyball team did not take home a medal at this year’s games.

Member countries of the Small States of Europe games stepped up their preparation for this year’s event. The Malta Volleyball Association increased the work they have been doing to prepare their Women and men’s teams ahead of the games.

The Women’s team was in an intense training camp in Malta ahead of the games held in San Marino this year. The training camp was headed by Daniel Antolin with assistance from Edvaldo da Silva.

The team was also joined by professional members form the Spanish volleyball team who acted as sparring partners so that the team could have the best possible preparation before the GSSE. As further preparation the team also competed in 4 friendlies against CVB Barca.

The Return Of Womens Volleyball

The return of the Women’s volleyball team to the GSSE has received high praise. This was the first time in 14 years that Malta will be sending their Women’s volleyball contingent to the games. Their last performance was in the 2003 games.

Malta sent 88 athletes to the GSSE this year and they were hoping to repeat the success they had in Iceland at the previous GSSE games where the country took home 31 medals.

Malta also has had hopes for their 12 athlete strong swimming team as well as the strong women’s and men’s cycling squad. The Maltese Olympic Committee stated that they were adamant to improve on their results in Iceland. Some setbacks came up like the loss of gold medallist Kevin Moore, despite the athlete being cleared of previous doping allegations. On the track and field events, the Maltese team was again being lead by Charlotte Wingfield.

Complaints About Mixed Nationals In Teams

The Maltese Olympic Committee made a point of remarking that many of the GSSE states used many foreign athletes which debatable can be seen as unfair advantages. They specifically mentioned Monaco which only had 20 local athletes in the 120 members they entered. Despite the reservations, Malta put up a fine performance yet again.

The GSSE went by smoothly for another year. The next games are to be held in 2019 so there is still much time for the Women’s Volleyball team to train hard and re-establish themselves as a true force to be reckoned with at the GSSE.

Italian Team Take FIVB Volleyball A1 Victory Italy claimed a commanding victory over Iran during a FIVB Volleyball match. Iran faced Italy in the Pool A1, Group 1 match during ….