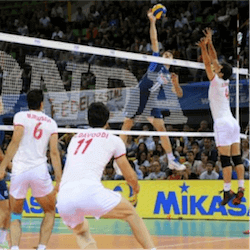 Italy claimed a commanding victory over Iran during a FIVB Volleyball match. Iran faced Italy in the Pool A1, Group 1 match during the first week of the FIVB tournament.

A Close Matchup Of Skilled Athletes

Iran made a valiant effort with strong play but they could not breach the confidence of the home team on their home ground. That said, Iran kept the games close, even by the first time-out of the match they were already chasing Italy with a score of 8-6.

The match was hard fought ending on equal footing of 11-11 by mid-game. From here on the Italian side took advantage of every single mistake the Iranian team made and took the lead again with a score of 16-13 by the second time out.

Constant Pressure From Both Teams

During the second set the Iranian team appeared much stronger but they were soon put back on the defence by Luigi Randozzo who helped put Italy in the lead with a 6-4 score.

Even though Iran fought back to a 13-13 equalizer, Italy again unleashed upon them and took the set 25-23.

The Last Stand In The Third Set

The third and final set showed that a pattern was forming. The Iranians took the lead at the start of the third set pushing to 4-1 but soon Italy started to attack again. The Iranians did well to play defensively, holding their lead to 16-14 during the second time out.

Of course their defences soon caved under the Italians barrage of attacks and the home team took the third and final set as well. Iranian coach Igor Kolakovic said that the team did not expect anything less form the powerful Italian team.

Kolakovic extended his thanks to the Italian supporters who cheered for his team, keeping them motivated through the sets. The Iranian team will be facing another strong team, Brazil, this weekend in Pesaro for their next volleyball match.

Italian coach Gianlorenzo Blengini also thanked the fans at the stadium and said that this victory is not just good for the team’s rankings but for their sprit. The victory helped cement the payoff of the hard work the team has been putting in in training and on the court.

Average GSSE Showing by Malta Womens Volleyball Despite their best efforts and a welcome return to the GSSE, Malta’s women’s volleyball team did not take home a medal at this ….