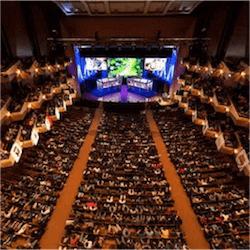 The annual Dota2 world championships, known as The International, kicks off next month and it was recently announced that the prize pool will be $20.8 million dollars. By comparison, the Super Bowl team, The New England patriots, awarded their players a $100 000 bonus each for winning the cup.

So far the tournament that has been running since 2011 has awarded over $55 million in prizes but this year’s amount dwarves the previous years. The way the event managed to collect such an astronomical prize pot was through indirect crowd funding.

Blizzard offers Dota 2 for sale on the game network Steam. When players purchase Dota they can buy an expansion package called the Battle Pass that provides players with new content such as quests and campaigns.

When they purchase this add on a quarter of the sale prices gets added to the Wold Championship prize pool, sort of like a progressive jackpot at an online casino.

The event kicks off in August and will run between the 7th and the 12th. Eighteen teams from all over the world will be taking part and the tournament will also form part of a documentary series called ELEAGUE: Road to the International Dota 2 Championships.

The series is set to coincide with the event in an attempt by Turner Sports to grow the eSports brand even further.

In preparation for The International, TBS, the network that will be airing the world championships will first air a documentary by developer Valve called Free To Play. In the documentary Tammy Tang, co-founder of the first ever all female Dota team called PMS Asterisk says that, just like with any sport, the team has a goal and a motive that everybody works towards achieving.

It has been an uphill fight for eSports to get the recognition of other sports despite the massive following and of course the massive amounts of money involved in sponsorships and online betting.

This year’s Dota championship, with the strong media coverage and public support it has been receiving, could well be the watershed moment for eSports to move even more into the mainstream consciousness. You can get your bets in online at Crownbet and see if you can back the winning team.