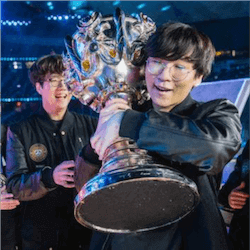 Samsung Galaxy has cleaned up at the League of Legends World Championships, sweeping aside SK Telekom T1 to take the finals 3-0. SSG will take home the much-coveted Summoners’ Cup as well as $1.7 million in prize money and whatever ever else they get from with fan contributions. Samsung went into the final as competition favourites, while SKT had dropped a number of games throughout the tournament to cast doubts over their abilities.

However, no one expected the total decimation that would follow. In one of the most dominant finals in Worlds history, Samsung completed a 3-0 whitewash, wiping the three-time Champions off the map. While there were moments in the second and third games where SKT were ahead, Samsung used SKT’s own tactics against them, forcing team fights and coming back time after time. This was the second win for team Samsung Galaxy and third appearance in the Finals. In 2016, the same two teams met in the finals with SKT taking win 3-2. This year, things were very different. Here is how it all played out:

How it All Played Out?

Game 1 wasn’t exactly the perfect game for Samsung, but that didn’t matter as SKT were never in contention. Held to just a single tower and no confirmed kills, SKT were in trouble form the get go. Samsung dominated every single aspect of the game. SK Telekom T1 was never given a chance to get back into the game. Their only chance of winning as a team fight which they might have been able to win, but that didn’t happen. SSG made sure that it all went their way from start to finish.

Game 2 was a more even affair with SKT controlling the early stages. Thinking they had the dominance in team fights, SKT drafted a split and abandoned the option of single fights. The general consensus was that SKT would be more powerful in a teamfight but again Samsung proved them wrong. Having no option of single fights, Samsung has one of the best teamfights ever seen. Grabbing the gold, they took over the game to make it 2-0.

In Game 3, SKT got the lead early on and took the game to a point where it looked as if the lead would be seemingly insurmountable for Samsung.  Again Samsung shocked their opponents by expertly setting up three picks against SKT’s damage carries. Not only did this pull them back into the game, it gave them the gold lead and the ability to take down their opponents Nexus.