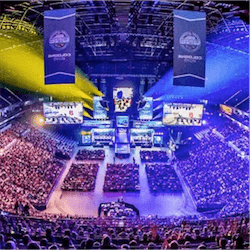 There’s also likely to be intense action in the national ESL Pro League Winter Championship game in Germany along with the other two tournaments. ESL, originally launched as Electronic Sports League, is the oldest eSports company still in existence, and the world’s largest.

It holds a variety of national championships in regions all over the world, with pro teams playing strategy and war games like Mortal Kombat, Heroes of the Storm, Halo, Battlefield 4 and, as in the Winter Championship, Counter-Strike.

The ESL German Winter Championship features 10 teams in nine rounds-robin, each team playing a two-match format against their opponents for the round. There is only one match day per week, and Saturday’s contest between Euronics Gaming (ESG) and Alternate Attax in Krefeld, Germany, is a Round 2 fixture, so there is still a lot of Winter Championship action ahead.

Picking a winner for Saturday’s two-match contest could be tricky. In Germany’s ESL Summer Championship earlier this year, the ESG team took out Alternate Attax, the winner of last season’s 99Damage league. But ESG then fell to Panthers Gaming in the Summer Championship final.

Since then, the ESG team has been rebooted almost completely, with only Thilo ‘syken’ Phan retained from the original line-up, joined by Christian ‘crisby’ Schmitt, Marko ‘kressy’ Dordevic, Oliver ‘kzy’ Heck and Markus ‘maRky’ Bach.