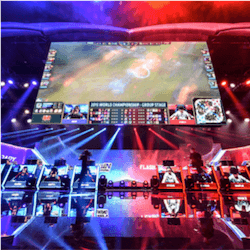 As computing power and online connectivity continue to increase worldwide, many Kiwis who enjoy online sports betting are starting to discover the possibilities of eSports betting. Although played entirely on computer gaming networks, the levels of skill and intensity of competition that are achieved by gamers make their sports just as exciting to punters as those that require turf, sweat, and real balls.

The biggest barrier to most punters, when they’re first considering eSports among the options at their favourite online betting sites, is working out exactly what the games at any specific event will be about. So herewith, then, a quick primer for non-gamers on the League of Legends World Championship rounds that will play out in China from 23-26 September.

The game League of Legends, referred to as LoL, was inspired by Defense of the Ancients, which was itself a modification, or mod, in gamer-speak, of Warcraft III: The Frozen Throne. And Warcraft III, naturally, was descended from Warcraft II, which was spawned by Warcraft. It’s set on a computer-generated map, filled with resources and obstacles, in which players must build bases with various utilities in order to arm their champions sufficiently to overpower enemy troops and installations.

So it’s a multiplayer online battle arena game; except instead of playing solo against a computer, gamers play in teams against other teams. The players’ avatars, called champions, come in various types, each with its own strengths and weaknesses, so a balanced team requires players with a variety of skills between them.

LoL has a number of modes, but in each one, the object is for a team to achieve the game’s pre-stated ‘victory condition’. This is usually the destruction of the other team’s core building, the Nexus. The play-in rounds of the 2017 League of Legends World Championship that start on Saturday will feature some top teams, making for closely contested results and real betting opportunities.