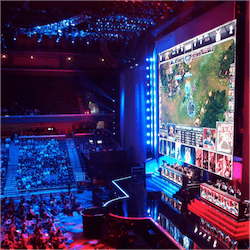 The Group Stage of the 2017 League of Legends World Championship is well underway and we are starting to get an idea of how each team is faring. After three days of play, one team for each of the four groups sits undefeated with at least two wins under their belt. For those who have yet to win a match, it is going to be an uphill climb out of the group stages.

At this stage of the tournament, the most surprising upsets are coming from the Korean Teams which usually dominate the group stage games. In their matchup against Royal Never Give Up, the Samsung Galaxy team found themselves completely dominated and struggling to find a hold of any sort. Likewise, the defending World Champions, SK Telecom T1 were on the verge of going down to ahq e-Sports Club, one of the biggest Underdogs in the competition. The rest of the matches were mostly going as predicted.

Korean Teams Look to be in Trouble

In the match against Team WE, TSM lifted their game and looked to be a completely different team to the one who played over 50 minutes against Flash Wolves. This time around, TSM put the pressure on WE’s jungle up front. This put them in a commanding position, which they held to close out the game in 34 min.

Looking at the Misfits/Flash Wolves games, the Misfits were always in control. While the game may have taken 46 minutes, there was never a question of who was going to win. The Misfits took down the Nexus without suffering a single kill. Meanwhile G2 Esports showed their dominance over 1907 Fenerbahçe Espor who were just not up for the skill of their group mates. This was also the first game in the tournament where Lulu beat Janna.

One of the most dominate games of the Championship so far has to the RNG over Samsung Galaxy. The team finished of Galaxy’s Nexus in less than 27 minutes, not giving up a single kill on the way there. It was a concerning show from the Koreans who need something special to recover. As for SKT, their game was far closer than it should have been. Losing the early game, SKT had to rely on their composition and work of Cho’Gath to keep them above water. This coupled with a few laps in concentration from ahq, gave them the opportunity they needed to get ahead.