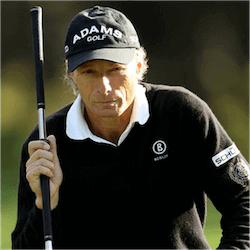 The Champions tour features some of the top earners in sport and this year has been one of the most lucrative for the talented field of golfers in the event.

Right at the top of the list is Bernard Langer, halfway to earning twice as much as the 2nd place golfer in the overall earnings scale. The golfer has courted a lot of controversy in recent days for still not altering his putting motion despite rule changes that have been implemented since 2016.

The rule addresses a technique known as anchoring. The controversy was stirred up after viewers complained about Langer’s technique based on his body language during the US Open.

The player has since been cleared of any infractions after the PGA investigated and confirmed that while his stance is unchanged, his technique is altered.

In second spot on the earnings list is Kenny Perry whose future on the tour was in doubt last year after withdrawing 2 rounds into the 2016 Champions tour with a swollen knee. A few weeks ago, Perry walked away with the 2017 US Open gold around his neck.

Not so fortunate was former PGA Champion Fred Couples. The living legend has withdrawn from the PGA tour on Monday due to back problems that have been plaguing him.

This comes as a huge blow to fans and the event organisers as Couples was seen as one of the main contenders to end the absolute domination of Langer in the last 3 years.

Despite Fred taking a month off this year, after which he returned to win the AFI Championship and snatch a 4th place finish in the US Open, he has needed to place his health first and he announced his retirement form the tour with a heavy heart. Fans will have to wait and see if this will be a career ending injury or if Fred will simply take some time off to make sure his body heals properly.