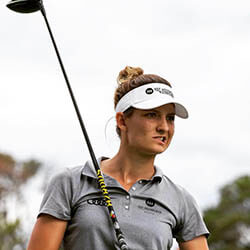 The Netherlands’ Anne van Dam has won the Andalucía Costa del Sol Open for the second consecutive year after she was able to overturn a one-stroke deficit during the final hole. Nanna Koerstz Madsen had led on the final tee, but had sent her drive straight into the lake and then went on to three putt for a double bogey. 244 year old Van damn had made par to finish on 13 under par while playing at the Marbella’s Aloha Golf Club. She was just one stroke ahead of India’s Aditi Ashok and Denmark’s Madsen.

Talking about her win, the player said that she was not expecting what had happened, and that it had been a crazy day. She added that Nanna is a good friend of hers, and she would have loved to beat her in the play off, finally saying that she had taken more of a risk by hitting a driver off the tee.

Van dam, who is currently the longest hitter on both the LPGA Tours and Ladies European Tour of this season, took the driver out of her bag for the event, and admitted that she is keen to reunite with it at a later stage. Madsen, who had began the day three strokes ahead of her main opponent but shot a closing two over par 74, said that she had played terrible and had three double bogeys that had cost her the game.