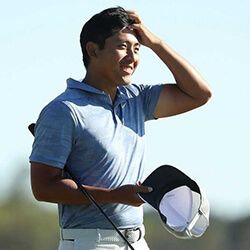 Chinese Taipei’s CT Pan has claimed his PGA Tour title thanks to a one shot victory while playing at the RBC Heritage in South Carolina. The 27 year old, who is 113 in the world and was two adrift the night before, shot only one bogey in a four under 67 that gave him a total of 12 under. Irishman Shane Lowry, who was leading after the first two games, finished in tie for third place, two behind, after ending the day with a 70.

World number one Dustin Johnson was one ahead for the last day, but eventually ended eight off of the pace with a 77, and Ian Poulter followed him with seven under and a 73. The strong winds earlier in the event had finally calmed down to a breeze at the Hilton Head, and for the early stages of Johnson’s round, four other players had joined him at 10 under.

Lowry fired three birdies for his first six holes and claiming a two shot lead, but a miss during a short putt at the ninth, along with a four from the left of the 12th green and a double bogey saw him slip behind by three. American Matt Kuchar, who won in 2014, claimed an eight-foot birdie putt for the last and earned a target of 11 under but Pan, who was making his 79th start for a PGA Tour, took the two final holes and remained at 12 under.