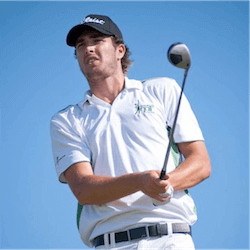 New Zealand golfer Daniel Pearce has won the Queensland PGA Championship in an exciting playoff after having blown an eight-shot lead. Daniel wasn’t even supposed to be at the event as his wife gave birth to their first child just four weeks ago. The initial plan for the Ashburton pro was to stay at home with his family but an 11th place showing at the New Zealand Open gave him a change of heart.

For his efforts at the New Zealand Open, Daniel received a tidy sum of NZ$20,500 as well as an exemption to play on the tour in 2018. Daniel went into the final round of the Queensland Open a full eight shots ahead of his nearest rivals. The 28-year old kiwi carded an unbelievable eight-under 62 at the City Golf Club in Toowoomba, to pull ahead of the pack. However, on the Sunday, Pearce came unstuck shooting four straight bogeys on holes five through eight.

Going into the back nine, Pearce was able to gather himself again carding an eagle on the 10th hole and a three-shot buffer over Australians Mathew Millar and Adam Burdett. Holding in fourth place was fellow kiwi Mark Brown. A steady putt on the 15th helped Pearce shoot a respectable two-over 72 while Mathew Millar managed to apply a bit of pressure carding a round of six-under 64.

Millar and Pearce went into the 18th hole tied on 20-under. Neither player was able to pull ahead with both of them sending their balls into the greenside bunker. Taking three shots to reach the pin, the two managed to force a playoff for the tournament. The first two holes of the playoff ended on par with Pearce recovering a brilliant shot from the rough to hold par with Millar.

On the third hole of the playoff, fellow kiwi, Luke Toomey joined Pearce on the fairway, carrying his bag and essentially becoming his lucky charm. It turned out to be a decisive point in the tournament. Losing his concentration, Millar sent his tee shot straight into the fairway bunker which needed a hybrid shot just to get back on track. His following shot ran through the entire green, handing Pearce the perfect opportunity.

Having hit his second shot straight onto the green, Pearce needed a simple two-putt to sink the ball while Millar was unable to chip back in to salvage the situation. This was Pearce’s first Australasian PGA Tour win. Further down the order, Hutt Brown finished in a tie for fourth place with a 15 under while Burdett carded a 16-under to claim third.