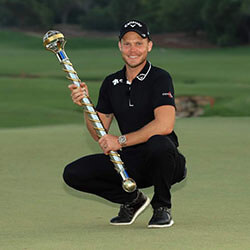 It was a tough battle for some of the golf world’s best players at the final round of the DP World Tour Championship. While Francesco Molinari won the Race to Dubai title, Danny Willet claimed the final win for the final round.

The last round of the event saw plenty of drama as almost 65000 fans lined up to watch Dubai’s most popular golfing event, which has had the support of the Emirates for the last nine years. It was an uphill fight for Willets, who started the round at the 72nd tee holding a two-shot lead. His first tee shot almost saw his luck turn south as it got stuck on the edge of a water hazard.

It was almost the final stroke in a long and tough season for the player, with the first signs of his changing fortune with his day-early arrival for the championship. Starting the fourth round sharing the lead with Patrick Reed, he managed to convert an eagle put from 40ft at the 2nd. Reed was also struggling as he played his front 9 in two over par.

Willet’s 18-under total meant a secure two-stroke win, while Reed closed in with a birdie to share second place with Matt Wallace, the Englishman who played an excellent European Tour season. Dean Burmester, Jon Rahm, and Adrian Otaegui all finished the day sharing four at minus 14. Molinari was one of the first to congratulate Willets as he stepped from the final green.