Fleetwood Getting Ready For Dubai Race 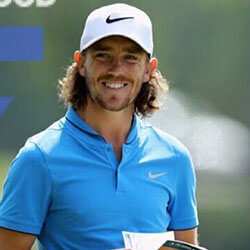 Tommy Fleetwood has told reporters that he’s looking forward to the opportunity to battle against fellow player and friend Francesco Molinari for the top of the Race to Dubai Rankings, just as the European Tour reaches its apex in the form of the DP World Tour Championship.

The English player entered the final event in last year’s campaign in the lead, and managed to earn the European Tour No. 1 lead position for the first time. But this year’s season sees his role reversed for the eight and final Rolex Series event, with Fleetwood currently sitting in second place behind the 2018 Open winner from Italy.

Speaking to reporters, Fleetwood said that it’s been different for him this year, and that it’s been exciting to have the challenge and excitement back in the event after his almost unchallenged win from last year.

A win for Fleetwood, along with Molinari finishing outside of the top five, would mean the 27-year-old would become the second player to win the Race to Dubai for two successive seasons, following on from Rory Mcllroy in 2014 and then again in 2015.

Mcllroy is currently set to complete his 2018 campaign with a strong finish by claiming his 14th European Tour victory, as well as a third DP World Tour Championship win. The Irishman arrived at the Jumeirah Golf Estate after a tied 21st place at the Nedbank Golf Challenge in South Africa, hoping to claim a portion of the Race to Dubai pool.